Can an additive remove ethanol from gasoline?

Ever since E10 fuel became the norm, enthusiasts have been trying to avoid it. This blend of gasoline containing 10% ethanol was mandated by the Energy Independence and Security Act of 2007, signed in to law by George W. Bush in December 2007. Part of that act was the creation of a Renewable Fuel Standard (RFS), which mandated target volumes for biofuels in the U.S. These targets are to increase each year until ultimately reaching 36 billion gallons in 2022. The mandated target for 2007 was 4.7 billion gallons.

As more and more of the nation's fuel supply was blended to meet the demands of the RFS the availability of non-ethanol gasoline decreased. Motorcyclists, classic car enthusiasts, restorers, racers and gearheads in general searched for stations selling "pure gas." There is even a website at pure‑gas.org devoted to locating stations across the country that offer straight gasoline. This demand has grown as the ever-increasing volumes mandated by the RFS require an increase in the amount of biofuels we blend. The possibility of E10 becoming E15 (or 15% ethanol) has been proposed.

What if you don't have access to E0 (zero percent ethanol) gas? There are dozens, if not hundreds, of products on the market that claim to treat ethanol-blended gasoline. Most of these are intended to deal with ethanol's attraction to moisture. The water vapor in the air is drawn in by the ethanol and turns into corrosion-causing moisture inside your tank. This is especially a problem for engines that sit idle for extended periods of time– like marine engines, lawn equipment or... your motorcycle in winter. But none of these additives actually remove the ethanol from the gasoline. For that we must use a mechanical means. 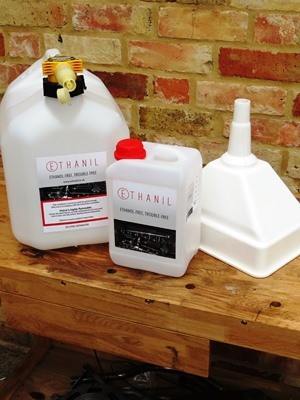 UK-based Ethanil has introduced a kit to purge ethanol from E10 gasoiline. Their seperator exploits ethanol's attraction for water and draws it out into a clever tank with a tap. Though we would not recommend drinking it!

The truth is you can do this yourself. In fact, an article from the December 2012 issue of Motorcycle Consumer News did just that. Removing Ethanol from E10 Fuel explains how to build your own mad scientist lab-version of a phase separator. What the Ethanil kit does is make it clean and foolproof.

The final step is to replenish the octane you've just removed from the fuel. Most people don't realize it, but ethanol increases the octane of gasoline. Straight ethanol is 108 octane! A product like 104+ Octane Boost can restore the octane that is lost when removing ethanol from E10.

So our advice is beware of any additive that claims it can remove the ethanol from gasoline. It's essentially not possible once you've pumped E10 into your tank. Treatments can make ethanol easier to live with, if you can't find pure gas or you're not up to the task of removing it altogether.