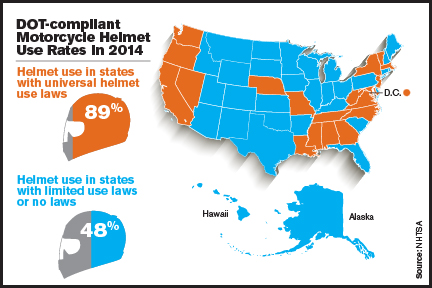 A recent report from the Governors Highway Safety Association (GHSA) predicts that motorcycle fatalaties nationwide will drop for the second year in a row. The Spotlight on Highway Safety shows a decline of 1.8% in 2014 from 2013. However that projected number is 26% higher than in 2004!

As you might expect, the statistics for states with helmet laws showed a lower incidence of deaths. In state with no helmet law or only limited requirements was only 48%. The report emphasizes a variety of areas that could further reduce the number of motorcycle deaths- curtailing alcohol and drug use, rider training, better licensing- but increased helmets use still stands out as the most effective safety measure.

“We are glad to see a continued decrease in motorcyclist fatalities, but the number of motorcyclist deaths on our roadways is still unacceptable,” said Kendell Poole, GHSA Chairman and Director of the Tennessee Office of Highway Safety. “While we support technology advances such as antilock brake systems and traction control, state laws and behavioral changes are critical to saving more motorcyclist lives.”

Poole emphasized the importance of all states adopting universal helmet laws and notes, “By far, helmets are the single most effective way to prevent serious injury and death in the event of a motorcycle crash.”